Category Archives
You are here: Home / Past Events 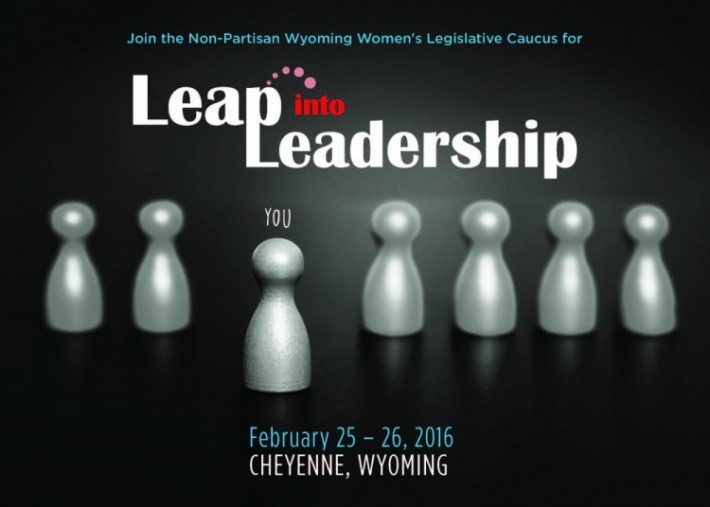 Register for Leap into Leadership 2016

Join us February 25 and 26th in Cheyenne for the ninth annual Leap into Leadership.

Award winning journalist and author of “Overwhelmed: Work, Love, and Play When No One Has the Time.”

Closing the gender gap in Wyoming’s Legislature. Finding ways to encourage women to run for the Legislature.

Currently Wyoming ranks 46th in percentage of women in its Legislature.  What can we do in both the short and long term to increase the number of women in the Wyoming Legislature?  This question was posed by Leadership Wyoming Class of 2016, as part of their Class Project.

This portion of the event is free and open to the public, however, if you are not registered for Leap into Leadership, you must register ahead of time by contacting Diana Dennison at ddenison@uwyo.edu.

An annual event since 2008, Leap into Leadership offers workshops, networking opportunities and speakers targeted for Wyoming women seeking to cultivate and expand their leadership skills and opportunities. For more information, contact info@wyowlc.org or 307-690-4705. 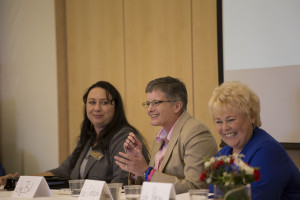 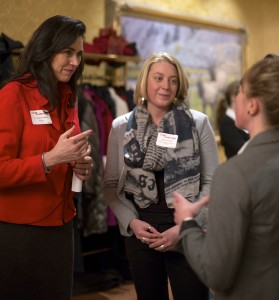 “You don’t always have to be successful, just keep going in the right direction.” 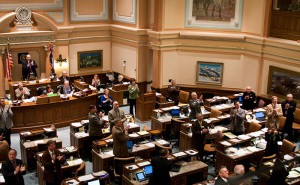 Executive Speech Coach Deb Sofield heard an old preacher once say, “When you die there are two dates on your tombstone, the day you were born and the day you die, and in between those dates a dash tells the world how you lived your life.” In a speech to over 200 people at Leap into Leadership 2013, Sofield asked, “What are you doing in the dash?”
Now in it’s sixth year, Leap into Leadership aims to increase women’s leadership at all levels. At least six Leap into Leadership alumni were elected to local or state office in the 2012 elections, part of a 125% increase in the number of women on county commissions and a 15% increase in the number of women in the Wyoming legislature.
Leap into Leadership 2013 focused on the theme “We the People” to address core values, civic engagement and ethics with a program including keynote speaker Sofield as well as an ethics workshop from the University of Wyoming College of Business, a simulated congressional hearing by students participating in We the People: The Citizen and the Constitution Program and leadership development workshops. 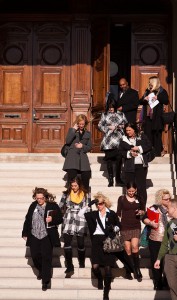 State Auditor Cynthia Cloud hosted participants for breakfast in her office in the state capitol, and former Auditor Rita Meyer spoke with participants about her path to leadership. “Look for where you want to go,” counseled Meyer, “You don’t always have to be successful, just keep going in the right direction.” Meyer, who is currently the Wyoming vice-president of Rocky Mountain Power, encouraged attendees to be the heroes of their own lives.“Attending Leap into Leadership… started me on my path to running for office and gave me some valuable insights into what it takes – and why women 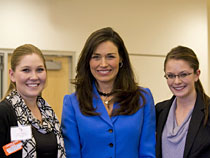 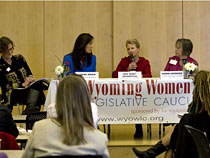 A record number of women attended Leap into Leadership on March 1st and 2nd in Cheyenne, and nearly 20% of attendees surveyed said they plan to run for elected office in 2012. Hosted annually by the bipartisan Wyoming Women’s Legislative Caucus, Leap into Leadership aims to increase women’s leadership at all levels. “We hope to promote a more representative face of government in the equality state,” says Melissa Turley, coordinator of the Wyoming Women’s Legislative Caucus.
Women make up less than 15% of the seats in the State Legislature and less than 6% of county commissioners across Wyoming, yet women comprise 49% of the population according to the 2010 census data. And despite the fact that the median age of Wyoming is 37, only 8 of 90 state legislators are under the age of 40.
“Leap into Leadership combines training with inspiration and motivation to move women into leadership roles in their communities and our state,” says Rep. Elaine Harvey, R-Lovell, and chairwoman of the Wyoming Women’s Legislative Caucus.
Twenty women attended a campaign planning workshop on March 2, which was intended to prepare them for the 2012 filing period from May 17 to June 12. Others participated in workshops focused on social media, community and personal leadership, and messaging. Participants overwhelmingly reported they found these leadership development workshops beneficial: “I learned how to run a campaign and be inspired by women who are very engaged in the process,” wrote one.
Leap into Leadership is a two-day event that includes speakers, training and a networking dinner. Keynote speaker Lynda Clarizio, CEO of INVISION, shared 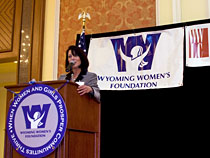 her eight principles of leadership with the 250 attendees, at a dinner co-hosted by the Wyoming Women’s Foundation. Clarizio encouraged women to take charge, seek out mentoring and networking opportunities, and inspire others by being true to themselves. She outlined the family-friendly practices that she offers in her company, of who 65% are women, such as flexible hours, video conferencing and part-time schedules.
The following morning, State Auditor Cynthia Cloud hosted breakfast in her office in the State Capitol, and Supreme Court Chief Justice Marilyn Kite spoke of the need for both a legislature and judiciary representative of the people. Justice Kite pointed out that while 35% of attorneys in Wyoming are women, just 7% of judges are female, and she called on Wyoming women to wield the collective strength of both genders. “The health of our state depends on you running,” she said.

First Lady Carol Mead and former first ladies Nancy Freudenthal and Sherri Geringer spoke about the opportunities and challenges each experienced as first lady of Wyoming as well as the issues important to them, specifically women and children. The program concluded on Friday with a presentation by Wyoming’s lone Congresswoman, Cynthia Lummis, who currently co-chairs the Congressional Caucus for Women’s Issues. Lummis stressed that women are best qualified to discuss women’s issues, and that a representative government should look more like the people they represent.

The bipartisan Wyoming Women’s Legislative Caucus and its partners assembled nearly 225 men and women in Cheyenne February 3 & 4, 2011, for speakers, workshops and discussion aimed at increasing the number of women in leadership in the Equality State. On Thursday, February 3, Governor & First Lady Mead attended a reception at Little America co-hosted by the Wyoming Women’s Foundation that featured three women in leadership in the Wyoming House of Representatives: Rep. Elaine Harvey, Rep. Rosie Berger and Rep. Mary Throne. Also in attendance were Secretary of State Max Maxfield, State Auditor Cynthia Cloud, Superintendent of Schools Cindy Hill and over a dozen state senators and representatives.
“Be rebellious enough to run,” said Rep. Mary Throne of Cheyenne, the House Minority Whip, drawing on a letter written by Abigail Adams in 1776 to her husband John. Rep. Throne, Rep. Harvey and Rep. Berger shared stories of their road to the Legislature, ranging from a conscious plan carried out over five years to being asked to run after approaching over 20 men to represent her district in the legislature. Rep. Berger, Chair of the House Appropriations Committee spoke of her experience as a committee chair, and encouraged attendees to get involved and be a leader in every level of their daily lives.

On Friday morning, State Auditor Cynthia Cloud, herself a graduate of Leap into Leadership, hosted breakfast in her office in the State Capitol. “We need to work harder to identify women interested in making a difference in their communities and their State,” said Auditor Cloud. Following breakfast, attendees received tips on how to advocate for change and create an effective message in workshops offered by The White House Project, National Conference of State Legislatures and Equality State Policy Center.
Liz Brimmer of Brimmer Communications moderated a panel of speakers Friday at noon including lobbyists and activists Mike Ceballos, Mary Ellbogen Garland, Deanna Frey, Sarah Mikesell Growney, Katharine Kunz Wilkinson and Larry Wolfe. Mr. Wolfe, an attorney with Holland & Hart, kicked off the panel by asserting that the Wyoming Legislature might be a more diverse and representative institution if Legislators were paid a year round salary, such as $20,000 to $25,000, and offered State health

“If you can imagine it, you can achieve it” -Mary Garland

insurance. Ms. Frey of the Wyoming Children’s Action Alliance concurred that our citizen legislature is not representative of the people of Wyoming; and at the end of the day, participants discussed drafting a bill to pay legislators an annual salary.
In closing, President and Co-Chair of the John P. Ellbogen Foundation Mary Garland encouraged participants to get out of their comfort zones, just like she did to participate in the lunch panel, “If you can imagine it, you can achieve it,” she said.