Category Archives
You are here: Home / Past Events

Wyoming women prepared to take on greater leadership responsibilities personally, professional and politically in Casper April 22 and 23 at the third annual Leap into Leadership event hosted by the Wyoming Women’s Legislative Caucus. At the event, Wyoming women legislators past and present shared their experience and encouraged others to follow in their footsteps, pointing out that only 15 women currently serve in the state legislature.

“If you don’t run, you won’t win for sure,” said Representative Debbie Hammons, “Your becoming involved changes the nature of the debate.” Representative Hammons, asked to speak on barriers for women in leadership encouraged participants not to let fear turn obstacles into barriers. Close to 90 men and women participated in the event, which included leadership development workshops and panelists speaking Friday at lunch about the conference theme, Finding your Voice. 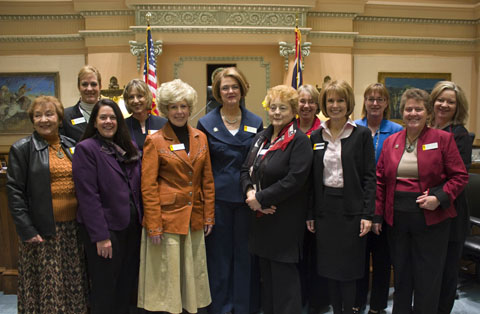 “I found my voice because I was so indignant,” said former Representative Clarene Law, who served in the Wyoming Legislature for 16 years, chairing two committees during that time. Miss Wyoming Anna Nelson spoke about finding her voice as a leader against underage drinking during her year as Miss Wyoming, and encouraged others to speak out, saying, “Anybody who has something to say in this state will be heard.”

Among the participants from Wyoming communities big and small were government workers, business owners, students and two candidates for the state legislature: Ruthann Petroff of Jackson who is running for House District 16; and Mayor Jodi Guerin of Laramie, who is running for Senate District 9. “The information and networking at Leap Into Leadership is amazing,” said Ms. Guerin, “With so few women in positions of leadership in Wyoming it is invaluable to be able to learn from those who have gone before me.  I believe that this event is helping us begin to develop a culture in Wyoming that encourages and supports women as leaders.”

The bipartisan Wyoming Women’s Legislative Caucus hosted over 100 women from across the Equality State at the State Capitol on Friday, February 29, 2008, for an event called “Leap into Leadership.” The day included coffee in State Auditor Rita Meyer’s office, leadership development workshops and speeches by Former Representative Clarene Law as well as Wyoming Women’s Legislative Caucus members Rep. Deb Hammons, D-Washakie, and Rep. Rosie Berger, R-Sheridan.
Former Representative Law, addressing the Wyoming House of Representatives in honor of Women’s History Month said, “I never thought I’d see unity like this, a Women’s Legislative Caucus, both sides of the aisle.” Representative Law also recognized the Equality State Policy Center and the Wyoming Business Alliance for working together on this event, celebrating the wonderful “partnership of purpose” that brought those two entities together for the sake of women’s leadership.
Representative Law stated that Wyoming has always been a state where women worked side by side with men, but as the last woman Chairman of the Wyoming House of Representatives, she said there is still much to be done to achieve equality. In closing, Representative Law asked for a resolution “. . . guaranteeing equality to every man, woman, and child within the 98,000 square miles of this great state, that affirms leadership and affirms true equality in this equality state.”
Women in state and local government, non-profits, private industry, and students flocked to the event. The youngest participant missed her 5th grade school day to attend with her mother, as did two high school seniors from Sheridan, and close to thirty undergrad and graduate students from the University of Wyoming attended. Thirty participants enjoyed their first-ever visit to the in-session Wyoming Legislature, and twenty-seven participants from age 18 to 60+ said they were thinking about running for elected office.